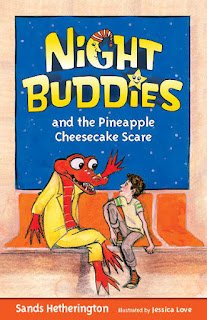 Tell us a little bit about your background and how you became an author.

Hi and thanks for inviting me. I'm an old man and have dabbled in fiction since I was fifteen or sixteen. I received some tear-stained rejection letters from major magazines in my twenties, then went back to graduate school and got degrees in English and creative writing. I published some stories in "little" magazines. I quit writing at that point and eventually became six-year-old John's single parent. We always did bedtime stories. One night John up and presented me with a red crocodile named Crosley that he'd invented for an after-lights-out companion. We started making up John and Crosley episodes, and Crosley got to be a real member of the family. After a year or so, I started thinking about putting the two "Night Buddies" into a book. I've done it twice now.

Tell us about your current book. Give a short summary.

It's called Night Buddies and the Pineapple Cheesecake Scare. It features young John Degraffenreidt who isn't ready to go to bed yet, and Crosley, a zany red crocodile who shows up to rescue him and sneak him out on an adventure. It seems the whole world's supply of pineapple cheesecakes is disappearing, and since both buddies love the things, something's got to be done. They take the subway to the great pineapple cheesecake factory and start their investigation. Things get spooky from there. Not only that, but Crosley is allergic to water and has to do the Black Bottom dance for hours anytime he gets wet. Unless he takes his pills.

econd book is Night Buddies, Imposters, and One Far-Out Flying Machine and it starts the same way. Some time has gone by and John is wide awake at bedtime again. Crosley reappears and rescues him per their Night Buddies Amalgamated contract. They borrow a really fantastic flying machine and fly off on their second adventure. This book is much longer and is coming out this fall.

Can you tell us about your publisher and how the process worked in getting published?

It's an indie book and I'm the publisher, with the indispensable guidance of my Book Sherpa, Gail Kearns in .

How did you get the idea for this book?

As I mentioned, my son practically handed it to me. Right there was this kid who needed something to do after lights-out, and right there was this zany character for him to do it with, so I only needed to figure out why Crosley happened to be red and then sneak them out of the house.

What is a typical writing day like for you?

Two hours or a little more, starting late in the morning. Try for 500 words and redo once before quitting.

What do you enjoy most about writing?

Mark Twain said it: "I hate writing. I love having written."

What is the most difficult part of writing?

I think it's sticking strictly to a schedule. It takes determination with nothing else pushing you.

How has publishing a book changed your life?

Not at all for now. The first title only hit the street on June 1st.

What are your plans now?

I need to launch the second book this fall. Then I'd like to get going on the third one. I've written just one page and can't figure how to get John out of his house. He was in a tight spot there at the end of the last story.

What is your best tip for aspiring authors?

What advice can you give adults, children and/or teens as they prepare for life?

Such a question! I'm definitely not a guru and would advise everyone to ignore any advice I might offer in this regard.

Night Buddies Amalgamated is an organization that sends operatives out to rescue kids who aren't ready for bed yet. They're crocodiles, actually, and they sneak their charges out on late-night "programs." (That's Night Buddies-speak for adventures.) The buddies we are concerned with are John, of course; a smart, curly-haired, round-eyed city kid, and Crosley, a goofy crocodile in a yellow suit who carries a bunch of magic gadgets on his belt. He is bright red because he is allergic to water. Kind of. In a roundabout way. And he's a total fanatic about pineapple cheesecakes. Pineapple cheesecakes are always a big deal whenever Crosley is around.