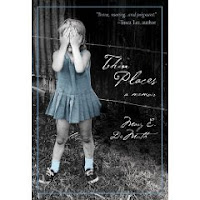 Join me in reading an interview by author Mary DeMuth. Her new book THIN PLACES is a tribute to how imperfect we are and how the love of Jesus can fill those imperfect voids. This author bares all in her book and it is a must read for those of us who have secrets and those of us who want to write about the deeper parts of life.


What trials did you face as a child?

It’s hard to write all that out and not feel bad for little me. But even in the recounting, I’ve been able to see the thin places in my life, those snatches of moments where God came near. That’s the message and hope of Thin Places, being able to see the nearness of God amidst heartache.

What compelled you to write Thin Places?

I felt sufficiently healed from my past, which had been a long, long journey. And in that healing, I knew I had the perspective I needed to be able to communicate my story with hope. In the past, I’d vomit my story of sexual abuse and neglect on any poor soul who’d listen, not with the intention to help her grow through her story, but to gain empathy.

But now I marvel at the path God’s brought me on, how gently He’s led me to this place of wholeness. From that abundance, I share my story. Why? Because I believe sharing the truth about our stories helps others see their own stories.

While I recorded the audio book for Thin Places, the producer asked me why I’d splay my life out this way.

“Because I don’t want folks to feel alone,” I told him.

I sure hope so.

In this memoir you give readers a candid glimpse into your upbringing. Was it hard to share particular parts of your story?

In some ways, it was easy. I’ve shared my story over a decade now. What was hard was giving myself permission to say it all, to not hold back, to explore the emotions I experienced during the rapes, the drug parties, the feelings of loneliness.

Oddly, though, it was harder for me to share what I’m dealing with now as a result of my upbringing than the actual initial trauma. It’s hard to admit that I’m still so needy, so insecure. After reading the book aloud, I saw I still had areas of growth, particularly in being so hard on myself.

What do you hope readers gain from reading your memoir?

I hope they see hope.

I hope they realize how profound and surprising and radical God’s redemption is.

I hope they’ll see the irresistibility of Jesus.

Some folks wait until grandparents and parents are deceased until they write a memoir, but you wrote yours with some still alive. Was that difficult?

Extremely. In many ways, agonizing. You can be assured that I prayed through every word. I’m thankful for my critique group who walked me through the writing and my stellar editor who helped shape the manuscript into a redemptive story. My goal was not to impugn or point the finger at what went wrong way back when, but to shout about God’s ability to transform a needy, incomplete girl.

It’s never easy to tell the truth, and I know my words may hurt some. But, thankfully, I’ve sought God’s heart in this and I can rest peacefully in knowing that.

Anne Lamott says, “Risk being unliked. Tell the truth as you understand it. If you're a writer, you have a moral obligation to do this. And it is a revolutionary act—truth is always subversive."

Thin Places is my answer to her quote.

But why go there? Why examine the past? Hasn’t the old passed away?

Yes, of course we must move forward. We must move beyond our pasts. But in order to do that, we must mourn the reality of what happened, not bury it under a rug. I love what Sam says in The Two Towers movie about the importance of telling our stories, no matter how dark: “It’s like in the great stories, Mr. Frodo. The ones that really mattered. Full of darkness and danger they were. And sometimes you didn’t want to know the end. Because how could the end be happy? How could the world go back to the way it was when so much bad has happened? But in the end, it’s only a passing thing, this shadow. Even darkness must pass. A new day will come. And when the sun shines it will shine out the clearer. Those were the stories that stayed with you.”

It’s my sincere hope that my story will stay with readers, not because of its sordidness, but because the Light of Jesus has shined so brightly upon it.

What encouragement or cautions do you have for those wanting to write their story?

First, prayerfully consider if this is something you need to do for therapy rather than publication. It’s very exposing to write a memoir. And sometimes we mistake the compelling feeling we have with publication. God sometimes calls us to write unpublished words, to get everything out on the page for the sake of our own personal healing.

Many of you have read memoirs that are self-indulgent or a poor-me fest. You need to evaluate whether you’re at a good place of healing before you embark on writing your story for everyone to read.

Do you worry that writing a memoir makes you out to be narcissistic?

Of course. Because I’m the main character! As I’ve edited, read and re-read the book, I’ve agonized over that. Now that the book’s released, I am resting. What’s done is done. And I honestly believe that the story isn’t about me. It’s about a rejuvenating God who stooped to rescue a needy, frail girl.

What fears have you battled as this book released?

Because this is such a personal book, I’ve worried about negative reviews. In some ways that’s good because it will force me to find my security and love from the One who made me, rather than the opinions of others. I’ve received some great endorsements, but also some harsh reviews. And those are the ones that knife me! Because the book’s about me!

I worry that I’ll be misunderstood. Or that telling the truth will hurt others. I’ve made a point to disguise nearly everyone and everything in the book, but of course the potential for hurt feelings is high.

I fear opposition by the father of lies. Since this is a truth-filled book, displaying authentic struggle, I have a feeling he won’t like it. I’m thankful for a specific, targeted prayer team around me to pray for protection regarding the release of this book. It’s humbling, actually, to see how God brought those pray-ers together.

Check out her book and let me know how it effected you. I work with teens who have had some of these same abuses done to them and the book was inspiring to me. There is hope for these kids if they get the right information and are offered a spiritual hand.