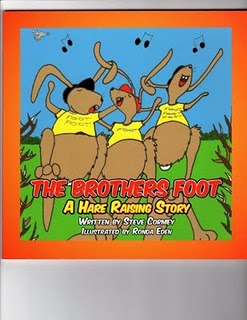 This is the book cover: doesn't it look fun.

Author Steve Corney has an impressive background. Illustrator Ronda Eden also has fun facts she shares here in her biography.

Third generation Coloradan, Steve Cormey has entertained the people of Grand County and Colorado for over thirty years. An award winning songwriter, he has written, produced and released six very successful CDs while playing an always full schedule of live performances.

His background in Folk ,bluegrass, rock and traditional music is evident whether live or on CD. Colorado Blue, Somewhere with a Beach, Never Summer..forever home, Walking Stick and the all solo-acoustic Pure & Simple CDs offer a potpourri of musical styles, and his Old Fashioned Christmas is a Yule Tide favorite. Steve’s live performances show off a talented mix of danceable music, humor and fun!

Steve makes his home in Grand County, Colorado. Although he has entertained in Australia, South Africa, Mexico, the Caribbean, Hawaii and around the country, you can usually catch his act in the shadows of the Never Summer Mountains of Colorado.


Ronda Eden was born in Adelaide, South Australia and spent her childhood dreaming about horses. She’s spent most of her adult life wandering around in a state of confusion over what she really wanted to do and now, middle-aged, she’s living her childhood dream. Ronda’s been a factory worker, Chinese cook’s assistant, pharmacy assistant, teacher, storyteller, writer, waitress, bartender, dishwasher, cleaner, touring art curator, gallery owner, horse trainer and artist A.O.T. (Among Other Things).


Ronda’s hobbies include the joy of hiking, climbing, wind surfing, belly dancing, jogging, traveling, swimming, daydreaming, listening to music and of course, horse riding. Apart from the later, none of these activities get much of her attention these days. Especially travel! Ronda loves it right where she is, doing exactly what she is doing. Ya’see, Ronda lives in Laramie, Wyoming with her husband Mernie and together they run a horse boarding operation with 60 horses, 2 mules, a miniature donkey and a tough, bad boy tomcat. Ronda still manages to be an artist A.O.T (Among Other Things) in between feeding, riding and shoveling poop, but the horses come first. She does travel during the summers, but a couple of the horses go with her and together they cover hundreds of miles on the endurance trails of the Mountain Region. Ronda plans to be hoisting her creaky ole body onto a horse and riding high well into her old age!


Happy Trails to you, Ronda Eden aka Ronnie Roo.