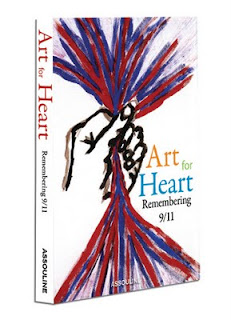 last words. I would hope I could tell anyone I knew how much I cared."

All of us were affected by the events of September 11th, but it was the youngest generation who was affected most of all. The innocence so profoundly disrupted that day is nowhere better demonstrated than in the drawings created shortly after the attacks by thousands of children. In their straightforward depictions, these works, both heartbreaking and heartwarming are testaments to the human instinct to bear witness, provide comfort, and attempt to make sense out of the unthinkable.

Commemorating the 10th anniversary of September 11th, Assouline is honored to present a collection of these drawings in Art for Heart: Remembering 9/11. This exquisite tome includes selections of artwork and messages from the New York University Child Study Center, the Art for Heart Program of the Lower Manhattan Development Corporation and Dear Hero and Notes of Hope collections, which have been acquired by the National September 11 Memorial & Museum.

Christy Ferer is an Emmy Award-winning political news reporter and anchor, who began her career in St. Louis before moving to New York as a lifestyle contributor to the network morning news shows. She founded Vidicom, a media services company, and Citybuzz, the nation’s first television visitors’ network, in 1982. She currently serves as a special assistant to Mayor Bloomberg on the rebuilding of the World Trade Center site after the 9/11 attacks. Ferer worked as commissioner of the Port Authority of New York and New Jersey for five years, is Chairman of Development for the National September 11 Memorial & Museum in Lower Manhattan and currently serves on the Board of the Jacob Javits Center, the 92nd Street Y, Global Green and American Corporate Partners.

ASSOULINE was chosen by the National September 11 Memorial & Museum to create Art for Heart: Remembering 9/11 for their highly original graphic concept. ASSOULINE books and luxury gift items are works of art that capture culture and bring it to life. The spirit and savoir-faire of the company have contributed to the creation of a unique and eclectic, chic and elegant brand that is immediately identifiable. ASSOULINE has published over one thousand titles across international markets on subjects including fashion, art, architecture and design, gastronomy, photography, travel, and viticulture.

ASSOULINE books have been translated into more than ten languages and are distributed in the most exclusive retail destinations worldwide, including Saks Fifth Avenue, Bergdorf Goodman, Sotheby’s, and Harvey Nichols, Dubai. ASSOULINE Boutique locations include Paris; ASSOULINE at The Plaza Hotel in New York City; ASSOULINE at Crystals at CityCenter in Las Vegas; ASSOULINE Books, Gifts & Gallery at South Coast Plaza; ASSOULINE Istanbul; and most recently, ASSOULINE at Liberty in London.


Art for Heart: Remembering 9/11 is available for purchase at ASSOULINE Boutiques worldwide and through http://www.assouline.com/ and http://www.911memorial.org/