Is there an Elephant in the room? 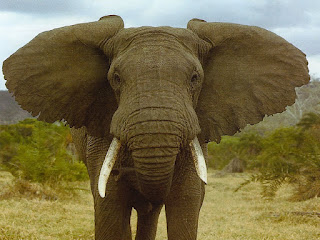 E is for Elephant: Is there an elephant in the room of your current story? I don't mean the two ton grey creature that is about to charge you with his ivory tusks, I mean the invisible "elephant that lurks in the corners of our lives and in the lives of our characters.

In real life many times there is an "elephant" or topic that should be spoken of but that no one wants to bring up. These topics are either totally ignored, quickly brushed over, or whispered about behind the closed door of another room like juicy gossip.

A good story will be  emotionally packed, action packed, and filled with twists and turns that will ultimately lead you to the unseen elephant in your story. What and where is the elephant in your current piece of writing? Would your story improve if there was an "elephant" that stirred your characters into action?

Let me know what you think and how you deal with the "elephant" in your work.